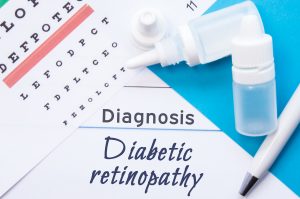 DR is a form of diabetics that damages the blood vessels in the tissue at the back of the eye, the retina.  Uncontrolled blood sugar is a risk factor that enhances Diabetic Retinopathy. As a result, the following occurs:

Diabetic Retinopathy is the leading cause of new cases of blindness in people 20 to 74 years of age in the United States. It is the most common form of diabetic eye disease and can lead to vision loss. Early detection, timely treatment, and appropriate follow-up care have the potential to reduce the severity of Diabetic Retinopathy disease.

People that have diabetes are more likely to come down with blinding eye diseases like diabetic retinopathy, glaucoma, and cataracts. Nevertheless, recent studies have discovered low awareness of this issue and especially among ethnicities at higher risk for diabetes. As a result, the findings illustrate that many Americans may not be defending themselves against diabetes-related vision loss, and therefore inspiring the American Academy of Ophthalmology to encourage those with diabetes to take proactive steps to protect their vision.

During the early stages of Diabetic Retinopathy:

If allowed to reach the advanced stage, proliferative, there will be an increased number of new blood vessels that are fragile and easily damaged resulting in swelling and leaking.  The non-proliferative and proliferative phases are (Source: Healthline.com):

Small amounts of fluid can leak into the retina at this stage, thus triggering swelling of the macula. This is an area near the center of the retina.

Increased swelling of tiny blood vessels starts to interfere with blood flow to the retina, preventing proper nourishment. This causes an accumulation of blood and other fluids in the macula.

This is an advanced stage of the disease, in which new blood vessels form in the retina. Since these blood vessels are often fragile, there’s a higher risk of fluid leakage. This triggers different vision problems such as blurriness, reduced field of vision, and even blindness.

If you believe you are experiencing any of the above symptoms it is imperative that you contact us immediately. We can evaluate the following to determine if you are suffering from DR:

It is important to note that there is no cure for Diabetes or Diabetic Retinopathy, and the best way to treat these conditions is to stay on top of your health. The American Eye Institute communicated that the risk of diabetic blindness can be reduced by 95% with early detection and timely treatment.

Happy Thanksgiving To You And Your Family!